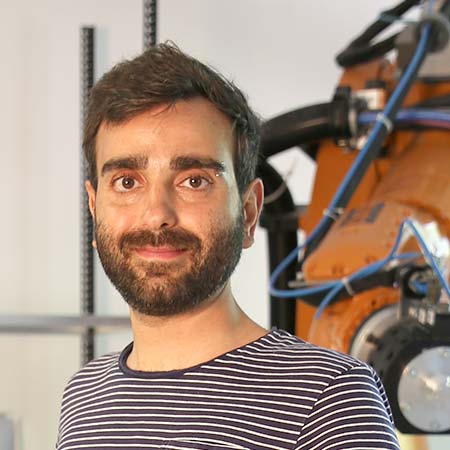 M.Sc. Hosam Alagi completed his studies in electrical engineering and information technology at the Karlsruhe Institute of Technology with a specialization in System-on-Chip. Since August 2015 he is working as a research assistant at the Institute for Anthropomatics and Robotics (IAR) at Intelligent Process Automation and Robotics Lab (IPR).
Focusing on human-robot interaction, he develops capacitive proximity and tactile sensors and evaluates methods that allows robots to perceive their near environment. Robots and robot tools equipped with large area sensors, so-called robot skin, are the key supporting the collaborative work and safe interaction between humans and robots in many areas.
Currently both the sensors and sensor applications are being implemented in two projects addressing the industrial and domestic domains. These are QBIIK (www.qbiik.de) and SINA (www.sina-projekt.de)